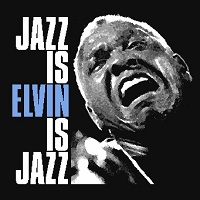 Posted by Luis Alejandre on Dec 12, 2012 in WordPress | Leave a comment

We were all surprised yesterday by the fact that the long-awaited and previously delayed version 3.5 of WordPress had finally been called “Elvin”, in honor of Elvin Jones.

So today the web was populated with many posts about the changes brought by WordPress 3.5 and its new features (the new media handling system being my favorite one).

I am a real jazz lover and, besides that, the news about honoring Elvin Jones with the release of WordPress 3.5 caught me while I was involved in developing a new website for a client who is a professional drummer and a fine jazz musician. That is why, instead of repeating what has already been said and written about the new WordPress version, I felt like I should write something about the jazz legend it honors. Just a few lines for those who never heard about Elvin (also, those for whom the word “theme” has nowadays a quite different meaning that it used to have for Elvin).

So who´s this Elvin anyway?

To me the name Elvin Jones has always been associated with one of the musical jewels of the 20th century, the famous album “A Love Supreme” by John Coltrane´s Classic Quartet, featuring also McCoy Tyner on the piano and Jimmy Garrison on bass. In the original liner notes of that album, the great saxophonist and composer John Coltrane said “To Elvin, James and McCoy, I would like to thank you for that which you give each time you perform on your instruments“. Let me tell you that they always gave a lot, each and every time they performed.

About his experience with the Coltrane quartet, Elvin commented: “Right from the beginning to the last time we played together it was something pure. The most impressive thing was a feeling of steady, collective learning… If there is anything like perfect harmony in human relationships, that band was as close as you can come“.

But of course Elvin´s career means much much more than A Love Supreme and John Coltrane Quartet. Born September 9, 1927 in Pontiac, Michigan, died May 18, 2004, Elvin is one of the most important drummers in history of Modern Jazz, and is regarded today as one of the most innovative among the greatest jazz drummers. Throughout his live he played with many of the jazz legends, including Charlie Parker, Miles Davis, Duke Ellington, Charles Mingus, Joe Farrell, Tommy Flanagan, Kenny Burrell, Bud Powell, Donald Byrd and many others, besides the already mentioned John Coltrane. Elvin Jones took his music seriously: “Playing is not something I do at night” he said, “It’s my function in life“.

Elvin Jones participated in literally hundreds of recordings, and not only as a sideman since he recorded more than 40 albums as a leader between 1961 and the end of the century, many of them released trough the prestigious jazz label Blue Note. For the greatest part of his career, Jones performed and recorded with his own group, the Elvin Jones Jazz Machine.

One of his live albums released on Blue Note, Live at the Lighthouse, featured performances recorded in one of my favorites spots in California: the Lighthouse Café in Hermosa Beach, very close to where I used to live when I spent a year and a half in Los Angeles.  It was recorded many years before my stay there, but I wouldn´t have minded to be part of the audience on those performances!

Those of you less used to jazz music may find interesting that Jimi Hendrix used to called his drummer Mitch Mitchell “my Elvin Jones”.

If you want to see Elvin perform, watch these two videos below. The first one is a solo recorded for a tv show featuring the  Elvin Jones Trio in Denmark in 1968, while the other solo belongs to a concert of Elvin Jones Jazz Machine at Stuttgart, Germany, in 1991:

By the way, I just realized that this has been the first article I posted using WordPress 3.5 “Elvin”!

How about you? Do you also like both Elvin Jones and WordPress Elvin as I do?

This website uses cookies to improve your experience while you navigate through the website. Out of these, the cookies that are categorized as necessary are stored on your browser as they are essential for the working of basic functionalities of the website. We also use third-party cookies that help us analyze and understand how you use this website. These cookies will be stored in your browser only with your consent. You also have the option to opt-out of these cookies. But opting out of some of these cookies may affect your browsing experience.
Necessary Always Enabled

Any cookies that may not be particularly necessary for the website to function and is used specifically to collect user personal data via analytics, ads, other embedded contents are termed as non-necessary cookies. It is mandatory to procure user consent prior to running these cookies on your website.