Two weeks ago I wrote a post about how easy it really is to create a WordPress child theme, and on that post I explained an even easier way to do it by means of a  plugin I had found after thinking about creating such a plugin myself.

The idea for that plugin was to allow people to create a child theme from their own WordPress Admin Dashboards, without the need to access their servers via FTP.

As I said, I was surprised to find that somebody had already thought about that need, so I wrote about how to use the One Click Child Theme plugin as an easier way to create a child theme.

But then I was surprised today when I learned that  a new plugin for child theme creation had just been released: Child Themify by John P. Bloch is a brand new plugin available since just a couple of days ago (version 1.0 date is December 31st, 2012).

I have installed the new Child Themify plugin on the same WordPress “Tutorial Test Site” I used in my previous post. After installing and activating the plugin, you will not find any modification to your dashboard, since there is no new menu element added to it. Your will not need it anyway, because the plugin only affects the “Appearance/Themes” section. Once you get there, you´ll see that the plugin is doing its work. The first thing to be noticed is that we have the possibility to create a child theme for each and every one of the themes we have installed, except for already existing child themes, if any:

You can see on the above image that, since I´m using my Tutorial Test Site as I left it on my previous tutorial, the active theme is “New 2012 Child Theme”. There´s  no option to create a grandchild theme from it, but there is a “Create a child theme” option for each of the other themes installed on the site, regardless of whether they are active or not.

This is the first difference  I´ve found between this plugin and the one I presented on my previous tutorial, since Once Click Child Theme will only create a new child theme for the active theme, which means that we need to activate the theme that we want to use as a parent theme before making the plugin create the child theme.

So far, so cool. Let´s go ahead using the plugin to create a new child theme and see what else is different. 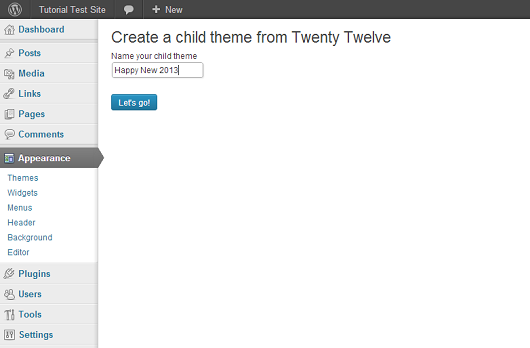 So, the second thing to be pointed out is that we are only able to enter the new theme name. We won´t find a way to fill in such other fields as a description, the author´s name, etc.

Is that a problem? Well, for one thing this method gives us a really fast and easy way to create a child theme, by just typing the Theme Name and clicking the “Let´s go!” button. But on the other hand I would say that it wouldn´t take too much time to type in other options and, in any case, if we were given the chance to do so, we could always leave them blank if we were in such a hurry.

I guess John P. Bloch made it this way for the sake of simplicity, though.

If we go to “Appearance/Themes” after having created our new child theme, we will have it right there waiting for us to activate it: 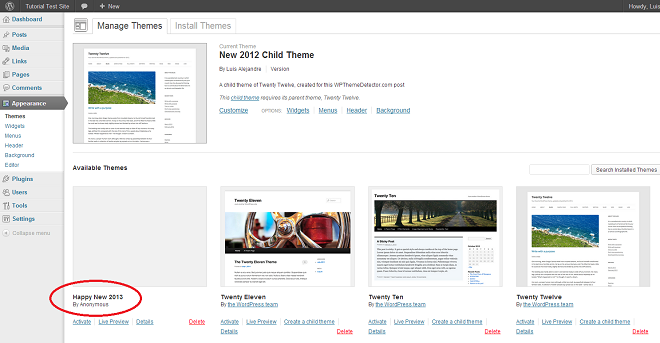 Note that the author´s name is shown as “Anonymous” because we did not fill that information in, and that there is no screenshot available yet. 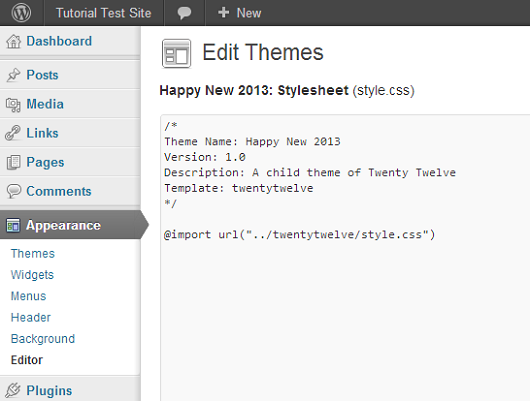 As we saw on my previous tutorial, there are 3 lines which must be in the style.css file of any child theme:

So the plugin took care of those mandatory lines, but we can see that it also wrote two additional lines:

Like I said before, this plugin is a very easy and fast way of creating a child theme. And even if we are not given the opportunity to fill other information in before creating the theme, we can always edit the style.css file, modify some lines (for example the description) or add new ones (for example the author) and save the changes.

What else is new?

Although I have not tried it on my Tutorial Test Site, according to the plugin information available in the WordPress Plugin Directory, this plugin is multisite compatible, which is good news. If the plugin is used on a multisite network, the controls for creating child themes will be in the network admin instead of the regular site admin.

On our previous post we learned that creating a child theme was easy, and that there was and even easier way to do it by means of a plugin.

Today we have learned that there is more than one “easier way” to create a WordPress child theme, and that we have a new plugin available for that purpose. Child Themify provides a fast and easy way to create a child theme for any of the themes that we have installed (as long as they are not child themes themselves)  and it is multisite compatible.

As always, I would be glad to know about your feelings and your progress through the comments!