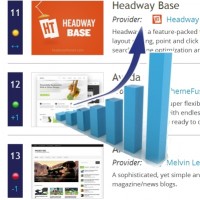 On that post I introduced the information and details you could get for each top theme “in the first version” of our report and, right at the end of the post, I also said “stay tuned, there is more to come!”.

Because there is more already.

Our first additions to these reports are a couple of statistical features that allow you to see the evolution of scores for every top theme by comparing the current metrics with older data: Rank Evolution and Usage Evolution.

The first added feature compares the current rank position for each theme with the position achieved by that theme a period of time ago. Right now the time interval for comparison is set to one week.

From now on you will see under the rank position number a little bullet light that may be displayed showing three different colors:

You can see an example of this in the following image:

Also, under that colored bullet you will find a number preceded by the plus or minus sign which indicates how many positions that theme went up or down, or else a little double horizontal arrow will show you that there is no change for that theme.

The second feature we have added to these reports compares the current percentage of analysed sites using each theme with the site usage percentage that was recorded for that theme some time ago (this time interval being currently set at one week also).

In this case the number that shows you the percentage of sites that are using that theme over the total analysed sites is now followed by a little icon displaying whether this metric went up, down, or stayed unvaried.

There is also a percentage number after the evolution icon, which tells you what the exact variation was for that metric.

We also took the opportunity of this update to include some “under the hood” code improvements for better performance of our stats.

So go ahead and see the new features dynamically working for you. We hope that you enjoy them and tell us about it in the comments.

And, as I´ve said before, please stay tuned!