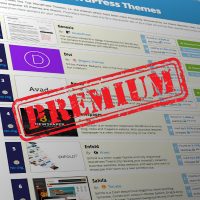 If you´re a regular visitor of this site, you already know about our Top WordPress Themes reports. They are automatically generated based only on statistics, using data obtained from all the site analysis performed by our WordPress Theme Detector tool.

Our Top Themes report is therefore an unbiased way of ranking WordPress themes based on their popularity, since it shows the themes that have been more frequently discovered by our theme detection tools, after millions of searches started by tons of thousands of users from all over the world.

Given their statistical quality, I personally like to check our “top” reports every once in a while in order to get a picture of how the WordPress ecosystem is going, and to try to learn about tendencies regarding popularity of themes and plugins. Well, I have to admit that I am in a privileged position since you only have access to the top reports for the present day, while I can always dig into our database, gather historical data and compare things from different moments.

No free themes appear among the top ten anymore

A couple of days ago I realized there was something new on the Top Themes report: the most popular free WordPress theme was no longer among the top ten. In other words, all Top 10 themes are premium themes at this moment.

There used to be always at least one free theme among the top ten. Just a year ago, for instance, Twenty Twelve was #8 instead of #11 as it shows nows, no longer being part of the top ten WordPress themes.

I´ve checked our records and collected historical data in order to picture the evolution of free themes among the top ten themes during the last 5 years, comparing the current situation with data for mid-December from 2016, 2015, 2014 and 2013. Their evolution is presented in the following table:

Four years ago, in mid-December 2013, we had 3 free WordPress themes among the top ten. Twenty Twelve was near the very top, occupying the third place, and it was closely followed by Twenty Eleven as #4 and Twenty Ten on the sixth position. Then the following year we only had 2 free themes on the top ten, and by the end of 2015 only one free theme remained there. And then, after a couple of years where premium themes have been gaining ground against free themes, by the end of 2017 we finally find that all of the top ten themes are premium now.

By the way, another conclusion to be noted is that, beginning with Twenty Thirteen, free default WordPress themes have never been as successful as their predecessors, as none of them made it to the top ten list. Twenty Fourteen is now on the 20th position, while Twenty Thirteen is #23.

Apart form Twenty Twelve, Twenty Thirteen and Twenty Fourteen, there is only one more free theme left among the current top 25: Hueman, in the 21st position. This theme, however, has a Pro version now, so I guess it should be considered more as a freemium theme from now on. In any case, we would be talking about just 4 free themes among the current top 25 themes, which means that 21 of them, i.e. the vast majority of the top 25 list, are premium themes.

The current situation for the Top Ten WordPress Themes, as of mid-December, 2017, is as shown on the list below.

7 themes out of the top ten are sold through Themeforest

Another thing that caught my attention is that 7 out of the 10 top WordPress themes are from theme authors or providers who sell through the Themeforest marketplace.

As a matter of fact, apart from the almighty Genesis theme (that has always been on the top position), the very successful Divi theme that occupies the second place, and the OptimizePress theme especialized in online marketers that closes this top ten list, the rest of these themes, all #3 through #9 in a row, are themes sold through Themeforest. The first of them is the popular Avada theme, that has been on the third position for a couple of years now.

Digging further in our database, I found these interesting facts that can illustrate the evolution:

Furthermore, if we search in the current top 25 list instead of in the top 10 list, we would realize that 15 out of the 21 premium themes found among the top 25 are themes available through Themeforest. That means more than 70% of the top premium themes, which follows the same situation found in the top ten (7 out of 10).

It clearly looks like WordPress users find that a premium theme is a valuable asset for their websites, as the most popular themes are all premium these days.

During the last few years, the WordPress ecosystem has been evolving towards a preference for premium themes over free themes.

Another noticeable tendency is the important share of the top premium theme market being held by Themeforest (around 70% at the moment). Over the years, the number of top premium themes available from authors that sell through that marketplace has been continuously increasing.

At any rate, given their typical prices, a good premium theme seems to be a good investment for any comercial website.

What do you think about the evolution of the premium theme market? Let us know through the comments.

This article includes affiliate links. If you make a purchase through them we might be compensated monetarily. Your price, however, will be the same as the one you would get by accessing the third party product directly.