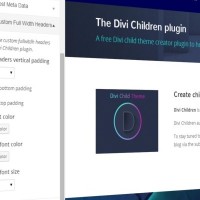 Today I´m going to talk about a plugin developed to automatically create child themes, but specifically for a particular parent theme: Divi, by Elegant Themes.

Let me tell you in the first place that this review can´t be unbiased, but that is just because I happen to be the creator of this plugin. However Divi Children is a free plugin, so I hope you will not mind a little enthusiasm from the developer.

Although the plugin will only be interesting for users of the Divi theme, there are lots of Divi users out there already. So I thought the recent release of the new 2.0 version of the plugin might be worth a little review on this blog, as it brings a lot of new features to customize Divi very easily and without writing a single line of code.

What is Divi Children?

Divi Children is a free plugin available for download at my site dedicated to the Divi theme, divi4u.com. The plugin was developed to help Divi users to easily create child themes of Divi at the click of a button.

The first version of Divi Children automatically grabbed the information about you and your site, and included a function to customize your footer credits. It also allowed you to change the default screenshot and included a patch for a Divi issue and a couple more convenient features.

But that is not what I had in mind when I started the Divi Children project. As I stated on my post Divi Children 2.0 sneak peek: Customizing Divi even further, without code, the real purpose of Divi Children is to help you customize Divi to a much broader extent.

I don´t like the Divi sites out there looking pretty much the same (and that is precisely what Divi detractors hold as the main argument against Divi). So the way I devised to fight that was by using child themes, and more particularly by using a plugin that could create highly customizable Divi child themes.

Aditionally, Divi Children 2.0 allows you to automatically update your Divi child theme to make sure you get access to all the new customization capabilities brought by the Divi Children Engine.

And that applies not only to child themes created by Divi Children, but to any child theme of Divi, even if it was manually created by you!

The Divi Children Engine is a pack of php files, bundled together in a separate folder within your child theme. It will take care of a lot of things to help you customize Divi very easily, without having to touch a single line of code and previewing all your changes thanks to the WordPress Customizer.

Apart from all the customizing capabilities provided by it, the awesomeness of the Divi Children Engine relies in that all its code is kept separated from the rest of your child theme files. That way it can be updated at any time to include new features or to comply with future new versions of Divi, without messing your child theme files.

Customize Divi by means of the WordPress Customizer

The first customizing sections packed with Divi Children 2.0 are:

You can get more details about the settings available for each of this sections and watch them in action on my Divi Children 2.0 release post. As an example, here is an animated image to show you what you can do in the case of the Footer Bottom:

The Customizer setting sections mentioned above are available for the entire site, but the Divi Chidren Engine also include some custom selectors and codes that can be used to customize Divi modules separately.

When editing pages, you´ll find at the right hand side of the Page Builder a collapsible box named “Divi Children Custom Code” where you can create some custom CSS classes and IDs that you can paste on Divi modules to customize them one by one.

The Divi Children Custom Classes and IDs are predefined selectors developed to customize Divi modules. Divi Children 2.0 comes with the first pack of custom selectors that include the following:

And the good news is that you can create as many of each of these custom selectors as you want, therefore extending the customizing capabilities to no end.

For instance, you may want to have two different types of Full Width Headers with different styles on various pages of your site, or even on the same page for that matter.

Also available in the “Divi Children Custom Code” box you will find what I´ve named “Magic Codes”. These are IDs that don´t affect the CSS but the functionality of some Divi modules.

Every Divi module form comes with a couple of fields for custom selectors: “CSS ID” and “CSS Class“. So, in the modules for which we want to change their functionality, why not leave “CSS Class” for real CSS customization and use “CSS ID” to tell Divi that we want the module to do something different?

That´s where the name Magic Codes comes from: We´ll be using CSS selectors to do things that may not be related to CSS at all, but it works! 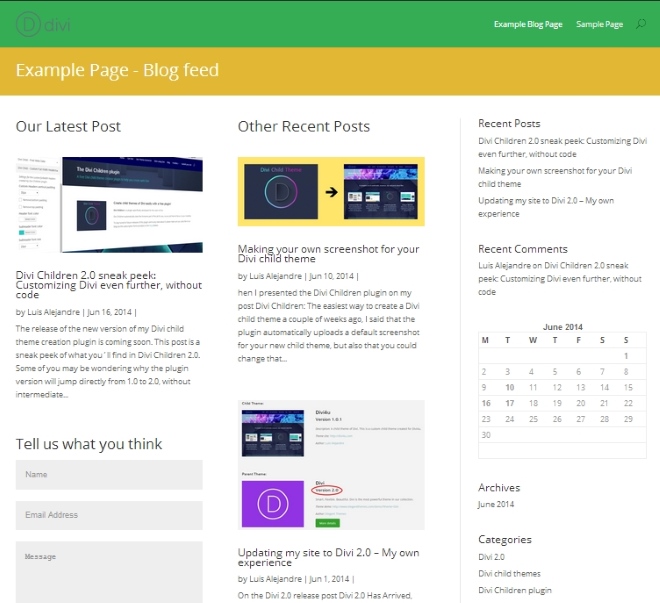 Many more customizing options to come

Divi Children 2.0 is just the beginning. The flexibility brought by the Divi Children Engine and the new install/update system will allow for lots of other cool things to help you customize Divi through your child themes.

The main hard work is already done, so it will be much easier now to add more Customizer sections, as well as new Custom Selectors or new Magic Codes in the next future (for releases 2.1, 2.2 …).

There are still many things that make Divi sites look too alike, and there is also a lot of room left for improvements to allow you customize Divi in seconds.

You can download this free plugin from the Divi Children plugin page.