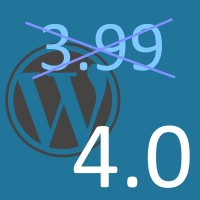 WordPress 4.0 is scheduled to be released today, September 4. The exact hour is not scheduled, so we´ll just leave it as September 4.0 🙂

But many people are feeling like the opposite of buying something on sale. When you buy something for $3.99 you know you´re going to spend 4 dollars anyway, you don´t care about the one tiny cent they´re going to give you with your change. But nevertheless you´re very happy because you see a 3 on the left hand side of the price tag.

Now with WordPress 4.0 everybody is happy with at least some of the new features, but the general feeling is that they´re getting something priced $3.99 for $4.00. I know, I know,  nobody is paying anything for WordPress, but I guess you´re getting what I mean.

We are all used to full version numbers meaning major releases for which revolutionary changes are to be expected. That will not be the case of WordPress 4.0, and that is why so many people are surprised to see the number 4 being used for the numbering of the new version. But to me the reason for that can be very simple: maybe it´s just because we just ran out of 3.Xs. So, what should it have been named, 3.9.9?

But you know what? I get the feeling that WordPress users will not mind “paying that extra cent“. In my case I can´t wait to use the more user friendly Visual Editor (the current editor makes me sick when I´m writing long posts), and I love that the Customizer is being improved. And the new plugin installer looks good, too. Not to mention the selection of languages after you´ve got WordPress 4.0 installed (in case you don´t know yet I´m a Spaniard, so I use WordPress a lot both in English and in Spanish). So would I care about the new version being called 4.0? Not at all.

You can read quite a few articles around the web where their authors foresee some degree of disappointment among users when WordPress 4.0 gets finally released, as in the case of Raelene Wilson or Kevin Muldoon (who just started writing for this blog earlier this week). I agree that some users might be puzzled by the use of a full version number for the new version but, like I said, I won´t wait for the change (I mean for the “extra cent”, I can´t wait for some of the changes WordPress 4.0 brings).

How about you? Please join the discussion through the comments.