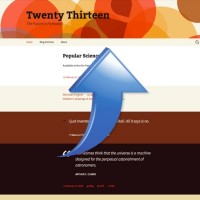 One month and one week after the public release of WordPress Version 3.6 “Oscar”, the new default theme Twenty Thirteen that comes with it has finally made its debut today on our Top WordPress Themes reports.

The Top WordPress Themes reports are dynamically generated from the data we collect every time a visitor uses our WordPress Theme Detector to find the theme and plugins used by a WordPress site.

That means that the top themes are ranked by their popularity, since they are ordered by the number of times our detection tools find each theme. We also give you metrics showing the percentage of sites using each theme, as well as the evolution of the metrics by comparing them with older data.

By the time WordPress 3.5 was released we didn´t have our Top WordPress Themes reports ready yet (we just offered our Top WP Providers reports by then, without stats for individual themes). So when we introduced this feature back in June, the previous default theme Twenty Twelve was already ranking high among the most popular themes.

I wondered how much time would it take for Twenty Thirteen to start showing up among the top 25 themes, and here you have it: This morning we had this theme on the 24th position, after climbing 3 positions in one week:

Twenty Thirteen went over the Standard Theme at once, and I´m afraid Standard will drop from our reports soon as 8BIT, the company behind Standard, announced a couple of weeks ago that they were closing for business and will no longer support this theme (see our post Standard, one of the Top WordPress Themes, says goodbye).

At the same time Twenty Ten, the oldest of the four default WordPress themes that are currently ranking on our Top WordPress Themes reports, is going down as it could be expected.